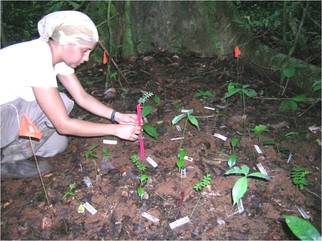 Understanding the mechanisms that maintain plant diversity and control relative species abundance is one of the main goals in ecology. There is compelling experimental evidence that negative feedback between plants and their soil-borne enemies is likely a strong force that maintains tree diversity and determines
relative abundance patterns in tropical forests. Negative plant-soil feedback maintain plant diversity because abundance of each plant species is regulated by its own species-specific enemies, which prevents any given species from
attaining high population densities and thus displacing other species. Deeper insights into the mechanisms are necessary to develop more effective conservation and reforestation techniques.

This is a collaborative project in which we take a multidimensional approach that
couples experimentation, plant pathology, and cutting edge molecular techniques to test the overarching hypothesis that plant-soil feedback is a general mechanism that maintains tree species diversity and determines tree-species relative abundance in tropical forests. 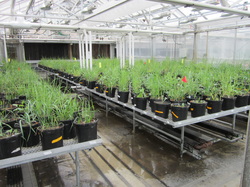 In a greenhouse study using native Tallgrass Prairie species, we focus on two aspects to better understand the mechanisms driving species coexistence: 1) The relative importance of soil microbes as underlying stabilizing mechanism which causes negative frequency dependence and consequently allows species to coexists. 2) The  impact of phylogenetic relatedness on mechanisms of species coexistence. We test if the likelihood that a pathogen can infect two plant species decreases continuously with phylogenetic distance between the plants.

Biodiversity-ecosystem functioning under climate change: the role of phylogenetic diversity and soil microbes 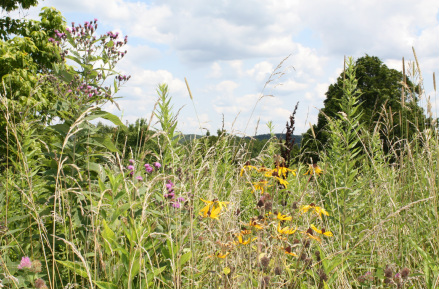 This research project focuses on native Tallgrass Prairie ecosystems, which provide a wealth of benefits to human societies, such as the production of food, providing a source of biofuels and climate regulation via sequestration of carbon in their soil. The provision of these ecosystem services increases with the diversification of plant communities. Although the positive correlation between plant diversity and ecosystem function is well documented, much debate centers on the underlying mechanisms that cause this relationship. Further, how the strengths of these mechanisms will change in response to climate change is virtually unknown.  Understanding the mechanisms that underlie ecosystem functioning is essential to ensure that future management techniques retain the provision of multiple ecosystem services, especially in the face of a changing climate.

SIFT students transplanting seedlings
We established experimental Tallgrass prairie communities at the Tyson Research Center and
test the novel hypothesis that plant-microbial interactions are the driving force underlying positive diversity-ecosystem function relationships, and that this relationship depends on the evolutionary relatedness of plant species comprising the community. We will be able to address our research questions from different angles as our collaborative, interdisciplinary team includes expertise spanning ecology, soil science, geochemistry and plant ecophysiology.

Understanding the processes that drive invasions is a major goal in ecology. Many hypotheses concerning success of invasive species focus on their enemies, such as herbivores. The enemy release hypothesis states that exotic plant species can become invasive as they leave specialist enemies behind and experience a reduced attack by generalist consumers in their introduced range. Contrastingly, the biotic resistance hypothesis states that exotic species may be less defended against herbivores in the introduced range, thus herbivores can act as a barrier to invasions.